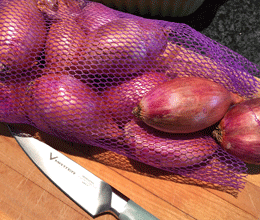 I’m a huge fan of shallots and I’m also a huge fan of cooking simple but tasty. And I’m learning one of the secrets of cooking simple-but-tasty is having a battery of condiments or garnishes or whatever-you-want-to-call in your pantry to flavor-up simple dishes. So when I got a post from Tasting Table about shallot confit that revelled in how you could pre-prep a stash and then use it later to dress up future recipes, I was intrigued.
WHAT’S A SHALLOT? Shallots are in the onion family and look like giant, reddish cloves of garlic. But they taste sweeter than, and not as acidic as, most garlic and onion—sort of a gentle blend of both. Shallots are used a lot in classic French cuisine and extensively throughout Asia, India, and the Middle East.

The word confit (pronounced con-fee) is most often used in traditional French cooking for duck legs that have been salted, slow-cooked in their own fat (we’re talking 170 to 275 degrees for four to ten hours), stored in that same fat, and then warmed-up and finished at a later date. Salting and storing the slow-cooked meat (submerged in its own fat in a cool place) was one of the earliest methods of preservation in olden days, and the word confit actually means preserved in French. If you’ve ever had duck confit salad at a stylish French bistro, your mouth will water from now until eternity when anybody utters the word confit. Yes, it’s that good. But I digress. . .

So a similar concept holds for shallot confit. You submerge the shallot cloves in oil, roast them at a low heat for a few hours, store them in the oil you roasted them in, and then pluck them out at a later date to enrich a recipe. The shallots get sweet and succulent from the slow-roasting (just like roasted garlic), so much so, you can simply mush them up and smear them on a slice of baguette and they will taste delicious.

How to Use Shallot Confit

NOTE: More often than not, you’re going to want to sauté the confit at a later date to finish it off, before adding to a dish.

Ingredients
1 pound shallots (around 12–14 small), peeled
1 1/2 cups olive oil (or more)
Some sprigs of thyme (optional, I did without)

Directions
1) Preheat the oven to 325 degrees.
2) Pack the shallots tightly, one layer deep, in a small, ovenproof dish. Pour enough oil to submerge most of the cloves and cover dish with foil. [For what it’s worth, I roasted 18–20 shallots, well over a pound, and used 1 3/4 cups of oil and it seemed like too much. I’ll try less oil next time around.]
3) Roast for 1 1/2 to 2 hours—until shallots turn pale gold and are soft.

Serve warm, or slice up and sauté on medium heat. Make ahead of time and store in their own oil. You should be able to be keep them up to 3 weeks—in the fridge, in an airtight container.

Pork-Chops with Shallot Confit and Mushrooms

This is the first dish I’ve flavored-up with my pre-prepped shallot confit:

– I sliced up a bunch of the shallot cloves confit and sautéed them in their own oil until they turned dark gold.
– Added thick-sliced baby portobello mushrooms and sautéed some more.
– Quick-fried thin pork chops brushed with olive-oil and salt and pepper and piled the shallot/mushroom mélange on top.

Simple but tasty! (Though I should have cooked the pork chops even less. Darn!) 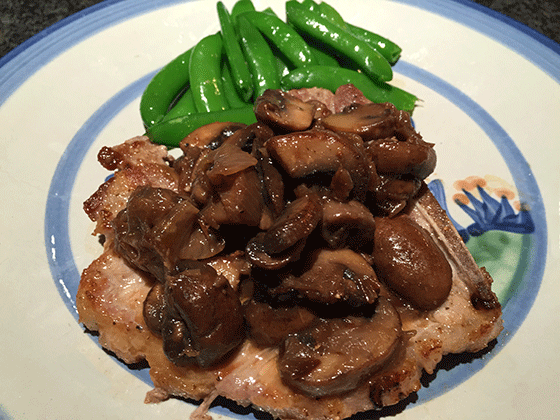 Try making some shallot confit yourself and tell me what you think! And please share more ways to use it :)