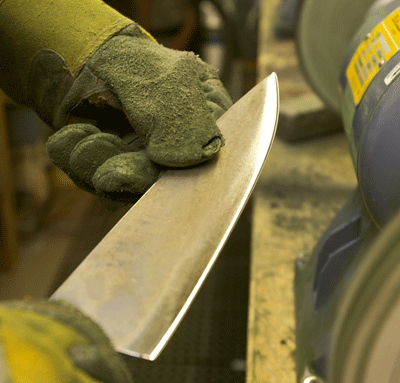 This is Part Two (and the final part) of a talk with Bob Tate, the owner-operator of one of my favorite sharpening services—Seattle Knife Sharpening Service. Bob consistently produces one of the sharpest edges you’ll ever feel on a knife and has built quite a following in a relatively short amount of time. So if you’re just tuning in now, make sure to go back and check out Part One where we covered Bob’s background and training as well as what he thinks is most important about his sharpening process.

I must admit I’ve always had a hard time wrapping my mind around the fact that stainless steel knives, although made of a softer steel, are more difficult to sharpen than carbon steel knives which are harder. It seems to defy logic. Does it have to do with the texture of the steel? Is it that stainless has a more elastic, more taffy-like, texture that doesn’t grind nice and neat, but tends to make more of a mess as it’s ground down?
As far as I know, the reason stainless is harder to sharpen is the various alloys added to the steel to make it stainless, notably chromium. It’s like if you took a block of cheese and embedded throughout were half-inch pebbles. Those pebbles are the chromium carbides. They are very tough.

That’s a great image—I can really picture those tough chromium pebbles. Speaking of tough . . . what’s the most demanding knife you’ve ever worked on?
The most challenging knives are the ones that are defective from the factory—and no brand is exempt. The worst defect is the one where the knife varies in thickness at a spot. If there is a variation, then it will create an uneven sharpening resulting most often in a hollow area. Then you spend a lot of time trying to sharpen the rest of the edge and avoiding that spot to make it even. It’s usually undetectable to the naked eye before you start.

What’s the fanciest knife you’ve ever sharpened?
The most expensive and most beautiful knife I ever sharpened was a Kramer firestorm pattern Damascus with a Thuya burl handle. A piece of art. [Below: Bob Kramer chef (Euro style) with whirlwind Damascus pattern and Amboyna burl handle.]

This must have been one of his hand-made beauties that he now auctions or has a lottery for, no? Do you have any idea how much it was worth?
Yes, it was a hand-made Damascus knife. It was worth many thousands of dollars. I was a bit nervous sharpening it, but his knives are quite simple to sharpen so it wasn’t a problem.

“Simple,” I’m assuming, because they’re not made of that annoyingly tough stainless steel, but of a harder carbon steel?
Yes.

I’ve heard that more traditional Japanese knives should only be sharpened on a waterstone. Are you comfortable sharpening these kinds of knives on your system? To honest, I’m not quite sure which brands we’re talking about here because everything’s become such a mixture of Western/Eastern. But I’m guessing something like a Bunmei with a single bevel. Don’t some of these have a curve to the blade that’s makes them especially tricky? Anyway. . . . are there any kinds of Japanese knife that you’d be hesitant to sharpen on your system?
From what I’ve seen, single bevel knives are sharpened on stones until the point that they have to be thinned out. Then they go to a huge water wheel made of stone or composite. They are then finished on stones after being ground on the big wheel. I’m doing essentially the same thing but with belts and wheels. The thing that’s most tricky is not overheating the steel on the belt or the wheels. But if you pay attention, it can certainly be done. [If you happen to be in the market for a new chef knife, see my most popular article: Best Chef Knives—Six Recommendations.]

Cool. So you think there’s no inherent reason why a machine sharpening service can’t do all those fancy-schmancy Japanese knives they sell on websites like Korin. You hear stories about traditional sharpening services messing up these kinds of knives all the time . . .
I believe it’s the operator and how they operate the equipment. Like everything else in life.

Why do you recommend using a ceramic steel to hone (versus a steel one)? I think I understand this, but I think it would be really helpful for my readers to hear an explanation from the horse’s mouth.
I think ceramic is the way to go since it hones as well as sharpens a little. It’s kind of like a whetstone in cylindrical form. The grooves in metal steels can cause micro chipping on, especially, hard steel, like some Japanese, and that’s not going to happen with ceramic.

What about Bob Kramer’s $200 honing steel that I’ve seen for sale on Sur La Table? Why isn’t it ceramic?
It’s probably steel because they thought it was the best material for those knives. There are many kinds of honing steels. Different ones serve different purposes. I have more to learn about steels, but right now I like ceramic.

What about a metal steel that’s smooth, that doesn’t have any grooves? Would that be less likely to damage a Japanese knife? Or is ceramic still better?
I think the ceramic is superior. Again, it’s similar to the waterstones that Japanese chefs use to keep their knives sharp at the end of every shift. [Below: KKG’s two favorite ceramic hones.]

I’ve read that you shouldn’t hone (or steel) a traditional Japanese knife. That you should only touch them up on a waterstone. Do you agree with this?
Touching them up on a waterstone is probably the way to go. But I don’t think you’re going to do much harm by using a ceramic steel. Remember, people like to obsess about all kinds of things, and that’s o.k., unless it’s preventing you from learning something.

Most of us who hone our kitchen knives know that, like sharpening, there are two major variables the operator can adjust—1) the angle and 2) how much pressure is used. And that the angle should match the knife and the pressure be pretty light. But what about after you’ve used the knife for a while, six, eight months down the road? Should we widen the angle some, increase the pressure?
Several months in you can switch to a diamond hone and then ceramic. The diamond is more aggressive and will chew the edge up a bit, so I like to follow it with ceramic.

I must admit I’m very nervous about using a diamond hone—I’m worried I’ll do more harm than good. Should I use less pressure? Do only one or two swipes?
You don’t have to worry about diamonds, just use it when appropriate and use the proper angle.

Do you think there’s a big difference in knife edge wear between end grain and edge grain cutting boards?
In general, I think end grain is best because it’s more consistent in its hardness. I think that’s important.

Why is consistent hardness in a cutting board so important to kitchen knives? For example, you’ve told me that you don’t recommend using bamboo boards for this same reason—that there’s an unevenness of hardness because of the “nodes”. What are the “nodes” anyway?
The nodes I refer to are the places in the bamboo plant where it is solid through the plant. It’s where the plant kind of bubbles out. If your bamboo cutting board was nodeless, I’m sure it would be good. But those pesky nodes are areas that a razor sharp knife will most likely meet with some trouble. It seems to be harder than the rest of the plant.

Does consistency in hardness hold true for other boards that mix types of wood? These boards are generally made of all hard woods, but the Janka hardness of each wood might vary quite a bit. . .
I think most pretty hardwood cutting boards are too hard for most knives. The tropical hardwoods are especially hard. There are many. They’re also the most beautiful. I, personally, would not use a cutting board made from such hard wood. I prefer a softer plastic board that I can also put in the dishwasher. [For more info on cutting boards, see Cutting Boards—Wood and Plastic.]

It’s been a great journey, Bob. My next-to-last question is a bit of a non-sequitur. On your website you sell Bob Kramer’s line of knives which he created in collaboration with Zwilling J.A. Henckels. You’re brave enough to call it “the best knife in the world.” What makes you comfortable making that claim? Because there are a lot of high-quality knives out there. . . :)
Obviously, I’ve not used every knife in the world, so what I should say is I’ve found it to be the best production kitchen knife I’ve ever used. The reason for this is because of Bob Kramer’s amazing design and the fact that they’ve used a quality tool steel for the knife blade. Because of the steel they use they are able to grind the knife to a thinness that makes it just glide through food, without breaking down. If you were to grind stainless that thin, it would not hold up simply because of what it is. It’s the same reason quality straight razors are made from straight steel and not stainless. The straight steel takes more attention in its maintenance, but will perform far superior to stainless. To me it’s a reasonable trade off. So there it is—superior design, superior ingredients, superior knife.

I’m sold. Put it on my Christmas list—for the next two Christmas’s . . .

And, finally. . .why do some people, such as yourself (I’m assuming), get so driven about sharpening knives? Like it’s a quest or something. What makes it so interesting, compelling?
I have to honestly say that it’s not a quest or obsession at all for me. It’s like when I cooked for a living. I really enjoyed making delicious food and making people happy. But unlike many chefs, I didn’t take it to the point where it ruled my life. If I enjoy doing something, I make a point of doing it well. The main thing is that it’s satisfying to me to use a sharp knife and it’s really satisfying to hear from a customer who feels like a whole new world of pleasure has been opened for them just by using a knife that I sharpened. I will, of course, keep learning and expanding my knowledge and am very grateful that I can make so many people happy by doing something I truly enjoy.

Thanks much, Bob . . . for being so generous with your time and your knowledge!

If any readers have any questions or feedback or just want to blab, make sure to leave a comment at the bottom of this page or visit the KitchenKnifeGuru Facebook page which is open 24/7. Feel free to check out Bob Tate’s website at Seattle Knife Sharpening. And if you’re curious to read how Bob stacks up in my original review of knife sharpening services (along with three other top-notch services), see my article Reviews of Professional Knife Sharpening Services.