How Many Kitchen Knives Do You Really Need? 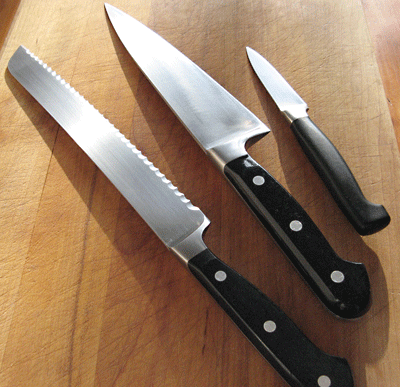 I suppose it depends on how fussy a cook you are are what kind of cooking you’re in the habit of doing with those kitchen knives of yours. Do you buy whole red snapper and debone and prep it yourself? Then you probably need a fillet knife. Do you peel lots of kiwi fruits? Then you might want a special curved parer. But if you’re an average cook, one that’s not in the habit of hacking up your own lamb shanks, you might be surprised to know you can strip it down to three kitchen knives:

3) a bread knife (or serrated/comparable).

1) If you’re in shopping mode, but on a budget and discouraged by the cost of the typical kitchen knife set—knowing you can accomplish most of your cooking needs with just these three can be a huge relief. It can also allow you to buy higher-quality knives by letting you concentrate your spending on just three instead of, say, six. (And, to be honest, the bread knife doesn’t really count. You can pennypinch on that one.)

2) If you already own a number of kitchen knives and you’re trying to keep them in tip-top shape and you’re feeling burdened with the thought of sharpening and honing them all. The short answer is you don’t have to. Try: a) mainly using only a chosen few and then rotating these out to be sharpened while you work the next batch. Or b) focusing your honing and sharpening on only a few key knives and leaving the others on the back burner.

See my post Three Kitchen Knife Sets I Recommend for some of my favorite starter kitchen knife sets!

Remembering that most of your kitchen work can be done with a core three is a liberating feeling. It can free you up to spend your money on quality, not quantity; and help you better maintain the knives you already own and use most. Because there’s no point in owning a battery of kitchen knives, if none of them are really sharp.

P.S. What knives would be next in line after these three?
– a fillet or boning knife, depending on whether you butcher more fish or chicken
– a long thin slicer for slicing up roasts and turkeys
– a second paring knife—especially if you have more than one cook in the kitchen
– a second chef knife—but this one smaller (6 inches) for in-between jobs like mincing garlic

Believe it or not, for the needs of my kitchen, a second smaller chef knife would be my top pick, followed by an extra paring. But everybody’s different! The main thing is to honestly access your needs and then commit to properly maintaining that group of knives.