Honeycrisp Apples — Have You Discovered Them Yet?

Honeycrisp apples — sweet as honey, but crisp as an October morning. If there ever was a fruit more aptly named, you’d be hard put to find it.

I live in apple country just an hour north of New York City where, believe it or not, there are numerous farms within ten minutes of my front door. Well, it’s apple time here in the quasi country and Honeycrisp apples have become the new favorite. Beating out Macoun, McIntosh, Cortlandt, and even the long-time American crowd–pleaser—Red Delicious. (Below: Wilkins Farm—orchards, farm store-outside, farm store-inside) 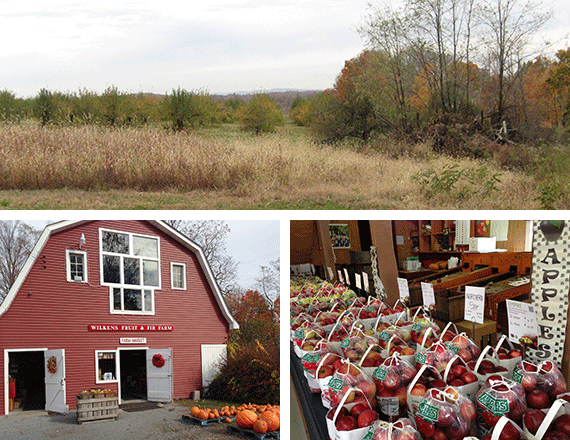 Moving here from the city seven years back, I’m embarrassed to admit I didn’t truly discover Honeycrisps until just last year. After poking around in my local farm market’s apple bins week after week, buying one of these and one of those and continually mixing up what it was I’d bought, I was suddenly inspired to do an organized taste test. To connect the name and visuals with my taste buds. So I bought a small armful of a variety of names, lined them up on the kitchen island, and my wife and I sliced and sampled. And when we tasted Honeycrisp, we both were hooked. Why?

Because:
1) Honeycrisp apples are super-sweet, but have a touch of tang. Sort of three parts Red Delicious, one part McIntosh. Kind of complex.
2) Honeycrisps are crisp. Duh. Crisp as Granny Smiths, not a chance of mush. (Unless they’re overripe, of course.)
3) Honeycrisps are especially juicy. The first time you bite into one you will never forget it. It, literally, waters in your mouth. This is what distinguishes Honeycrisps from all other apples. And there’s a scientific reason why—the cells in a Honeycrisp are twice the size of most other breeds. When you take a bite, the cells are ruptured and release the juice. Bigger cells equals . . . more juice.

EXTRA CREDIT: What state in the U.S.A. grows more apples than any other? (Answer at the bottom of page.)

TRUE TO SEED: Most apple trees are not “true to seed”—which means if you plant a Honeycrisp apple seed, it will NOT grow into a tree bearing Honeycrisp apples. Totally weird, huh? It has to do with apple genetics. The only dependable way to grow a new apple tree bearing the fruit you desire is to graft a branch from the tree with the desired fruit onto the root stock of another breed.

Soooo, if you’ve never had a Honeycrisp apple, now’s the time to sample. Buy a bag of Honeycrisps while they last. They’re the ultimate apple for eating raw. Here’s my favorite way to slice them up, using one of my favorite paring knives:
1) First, cut off the ends, so that the apple can stand without wobbling.
2) Slice it half. Then into quarters.
3) Stand each quarter on end and, moving straight down, slice off the core section.
4) Laying it flat, slice each quarter into bite-size slivers. 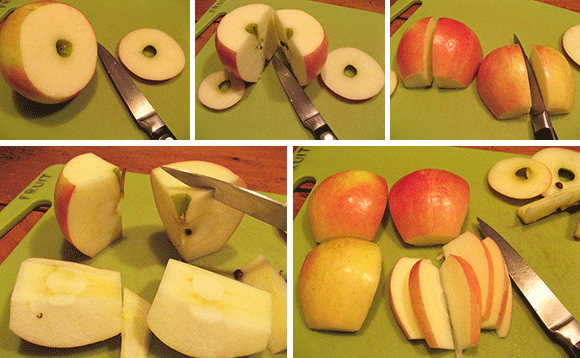 The paring knife I’m using is a Henckels Professional S four-inch which is one of Henckels’ high-quality lines. I recommend paying more for kitchen knives because, if you maintain them properly, they will 1) stay sharp longer in-between sharpenings and 2) stand up to being sharpened year after year. They can last a lifetime! 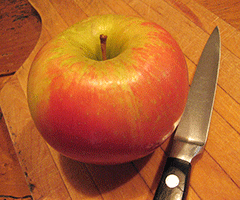 P.S. Here’s a fascinating article on apples and their history in the U.S.—Why Your Supermarket Sells Only 5 Kinds of Apples.

(ANSWER: Washington State—the climate is ideal on the Eastern foothills of the Cascades.)